Do you wish to leave this site? 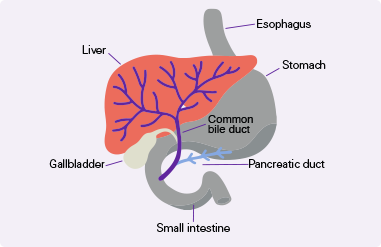 CholangiocarcinomaCholangiocarcinoma, also called bile duct cancer, is a rare cancer that forms in the bile ducts., also called Bile ducts are tubes that carry bile (fluid made by the liver) between the liver and gallbladder and the small intestine.bile duct cancer, is a rare and aggressive cancer that forms in the bile ducts inside and around the liver. It accounts for about 3% of cancers in the gastrointestinal systemGastrointestinal system includes the mouth, throat, esophagus, stomach, small intestine, large intestine, rectum, and anus. It also includes the salivary glands, liver, gallbladder, and pancreas, which help the body digest food and liquids. Also called the digestive system..

Approximately 8000 people in the United States are diagnosed with cholangiocarcinoma each year, but because it is a difficult cancer to diagnose, the actual number of cases may be higher.

According to the site of origin: 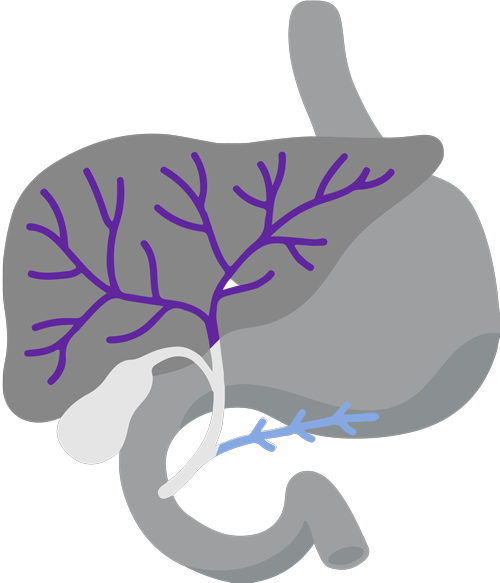 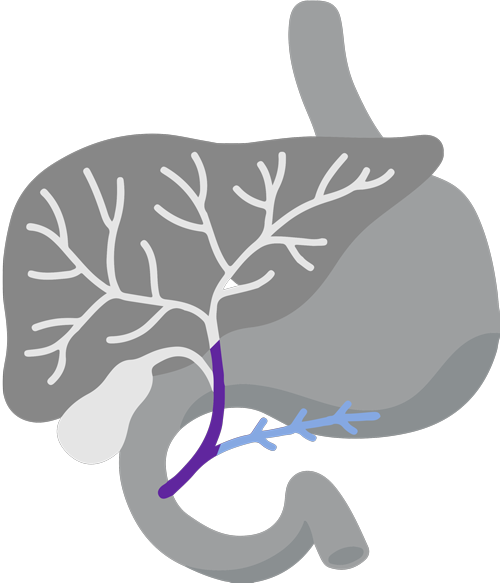 According to the tumor location:

Cholangiocarcinoma can develop because of certain genetic abnormalities, or mutationsMutations are changes in the DNA sequences of cells. Mutations may be caused by mistakes during cell division, or they may be caused by exposure to DNA-damaging agents in the environment. Certain mutations may lead to cancer or other diseases.. Genetic mutations are changes in the DNA of a cell. They can result in cells growing and dividing without the usual controls. Over time, a mass of uncontrolled cells can grow and become a tumor.

Biomarker testing
Your doctor may recommend biomarker testingBiomarker testing involves a piece of tumor (from biopsy or surgery) being sent to the laboratory for analysis to check for certain genes, proteins, or other molecules that may be a sign of a disease or condition, such as cancer. to look for specific changes in the DNA of the cancer cells.

Biomarker testing involves a piece of your tumor (obtained from biopsy or surgery) being sent to the laboratory for analysis.

It may take a few weeks to get results, but the results will enable your doctor to personalize the best approach to treating your type of cancer.

HOW TREATMENT WITH TIBSOVO WORKS

How TIBSOVO works against your cholangiocarcinoma

Targeted Therapy
TIBSOVO specifically targets the mutated IDH1 protein, which can slow down the progression of advanced cholangiocarcinoma.

TIBSOVO works differently from traditional chemotherapyChemotherapy is a drug treatment that uses chemicals to kill cells that divide quickly, including cancer cells and cells in healthy tissue.. Chemotherapy kills cells that divide quickly, including both tumor cells and cells in healthy tissue. Chemotherapy is also typically given by infusionInfusion therapy is when medication or fluids are administered through a needle or catheter. Also called intravenous infusion, it's a way of delivering medication that can't be taken orally or that needs to be dispensed at a controlled pace., which usually takes place in an infusion center.

Proven results
For patients with advanced mutated IDH1 cholangiocarcinoma who have been previously treated, targeted therapy with TIBSOVO has been shown to increase the length of time a person can live with cholangiocarcinoma without the disease getting worse.

Convenient once-daily pill
TIBSOVO is a pill that's typically prescribed for patients to take 2 tablets once a day. You can take TIBSOVO at home with or without food and without the infusion time requirements of chemotherapy.

Traditional chemotherapy is cytotoxicCytotoxic means toxic to living cells, “cyto” means cell and “toxic” means poison, as in chemotherapy drugs that kill cancer cells., which means it kills both abnormal and healthy cells. Unlike chemotherapy, TIBSOVO only targets tumor cells with mutated IDH1.

Back to top
TIBSOVO results in CCA

We use cookies to improve your experience, produce audience statistics, offer you services tailored to your interests, and provide features associated with social media. You can change your preferences at any time on the site.

TIBSOVO is a prescription medicine used to treat adults with bile duct cancer (cholangiocarcinoma) that has spread:

Your healthcare provider will perform a test to make sure that TIBSOVO is right for you. It is not known if TIBSOVO is safe and effective in children.

TIBSOVO may cause serious side effects, including:

The most common side effects of TIBSOVO in adults with Cholangiocarcinoma include:

TIBSOVO may cause fertility problems in females and males, which may affect your ability to have children. Talk to your healthcare provider if you have concerns about fertility.

These are not all the possible side effects of TIBSOVO. Call your doctor for medical advice about side effects. You may report side effects to the FDA at 1-800-FDA-1088 or www.fda.gov/medwatch.

Before taking TIBSOVO, tell your healthcare provider about all of your medical conditions, including if you:

TIBSOVO is a prescription medicine used to treat adults with bile duct cancer (cholangiocarcinoma) that has spread:

TIBSOVO may cause serious side effects, including: